This pony’s hooves have become severely deformed due to chronic laminitis. Source : www.alleghenyequine.net

What is Laminitis?
Other names: Founder, Sink

Laminitis most commonly affects the front feet, however can also occur in the hind limbs. If recognised early, long term effects can be avoided; however, chronic laminitis can lead to ongoing pain, unsoundness, and even penetration of the sole by the pedal bone.

As the exact cause of laminitis is not completely understood, prevention and successful treatment is often limited. Currently a lot of research is happening about laminitis and its causes, and hopefully more information about this frustrating disease will become available soon. 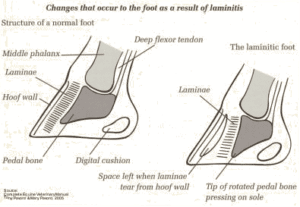 Several causes and risk factors contribute to the development of laminitis. An important fact to understand is that many of the causes of laminitis do not directly impact the hoof, but produce a systemic disease that subsequently affects the small blood vessels of the laminae within the hoof. Although ponies are highly prone to developing laminitis, any type of horse can be affected.

Common causes of laminitis include:

Diet is a major contributing cause of laminitis.

What are the stages of laminitis and how can I recognise them?
Laminitis occurs in three stages. Contact us if you suspect your horse or pony is suffering any of the following:

Can I treat laminitis?

With early intervention, many laminitis cases can be successfully managed. However, unfortunately there is no specific cure.

The most important aspect of treatment is early identification, removal, and/or treatment of the cause. For example, if the inciting cause of laminitis is obesity, the horse’s diet should be restricted, with weight loss as the goal.

Veterinary advice should be sought from us as soon as possible, as early treatment can prevent further deterioration. Management and treatment of laminitis by our veterinarians may include:

Although some cases respond relatively quickly to treatment, others may take weeks and possibly even months for a complete recovery. Depending on the severity of the laminitis, gradual corrective shoeing and anti-inflammatory therapy may return the hoof to normal. However, in very severe cases where the coffin bone has penetrated the sole, euthanasia should be performed on humane grounds.

X-rays (radiographs) of horses’ foot with chronic laminitis showing rotation of pedal bone (above) and chronic remodeling of the pedal bone and hoof (below).

How can I prevent laminitis?

As with most diseases, prevention is the best cure, and is far more effective than treatment. Unfortunately, once a horse who has had laminitis will be prone to future episodes. However, repeat occurrences can be reduced with good management.

Below are some tips for preventing laminitis in the horse or pony: