“Doing a victory lap at my first international competition was definitely the highlight of my trip.”

I have always had a love for horses and I grew up around them. My horse riding career began with pony club however I found that I most enjoyed show jumping, so I became involved in jump clubs and show jumping competitions all around the country.

At a very young age I started competing at show jumping competitions, which led to me competing at my first Sydney Royal Show. In 2014, I represented my state at the Australian Interschools Championships where I was the Captain of the show jumping team.

I have always wanted to travel and experience the amazing sport of show jumping on the other side of the world. When the opportunity of being a working student at Duffys Sport Horses in the south of Ireland came up I couldn’t say no.

It took eight months of organising and planning in preparation for my trip but the day finally came! I left the amazing team at Canberra Equine Hospital and started my journey to explore the performance horse industry in the little Irish county of Mayo.

I landed in Dublin after a very long 21-hour flight. Of course it was raining in Ireland, but it was surprisingly warm. I made my way to a very nice town called Foxford, where I would be staying for the next six weeks in a bed-and-breakfast just 10 minutes from the Duffys Sport Horses ‘Yard’.

Duffys Sport Horses have two yards in Ireland a couple of hours away from each other. One is an intense performance yard and one is a dealing yard. I was at the dealing yard where I learned how to have the horses prepared for sale every day and keeping them in tip-top condition. Clients would come in all day every day to view the horses.

Day one at the yard was MASSIVE! After getting to know everyone and meeting each of the 35 horses in work, I got straight into my first day of work. My daily routine involved arriving at the yard early in the morning to clean 10 to 15 boxes. I then had six to seven horses to ride a day, and maybe some lunch somewhere in the middle of all of that.

The horses are stabled 24/7 with 20 minutes on the walker in the morning and a daily turn out either in the fields or the large indoor arena if it was raining. Even the cattle in Ireland are stabled most of the year which was a big eye-opener for me!

After two weeks of riding many different horses and cleaning stables hundreds of times I was told that I would be able to compete in an international competition at Millstreet, Ireland!

Sally, a gorgeous 9-year-old Irish draft horse, was my chosen horse for the competition. In preparation for the competition we attended a small training day where the jumping height started at 90cm and went up to 1.30m. As I was jumping for the first time on Sally it was a great place for us to get to know each other. Not surprisingly it rained the entire day! I don’t think I’ve ever been that wet in my life, but I soon learnt you have to work in any conditions when you are in Ireland.

The day of the competition came around and it was time to pack all 35 horses up, including all their gear, to drive three hours to Millstreet. It was a massive shock to see the size and quality of the competitions in Ireland. There were six rings with most classes having 150 riders in each, and I had no idea how they were going to run such a large day. However it ran perfectly with 90cm classes, 1.30m pony classes and 1.60m Grand Prix and everything in-between.

I had four days of competition on Sally competing in the 1.10m classes with the first day being the biggest and most daunting. Even though it was a large competition everyone was so welcoming and helpful and my day ran smoothly. I succeeded in making it to the finals, which were held on the last day of the competition, as I had placed in the top ten of some of my classes throughout the week.

I was extremely nervous but very proud of my achievement of being placed in the top ten before the finals on the last day. Luckily, I was riding a very experienced and relaxed mare. I was very relieved and excited after jumping a clear round in the first round of the Grand Prix. Jumping another clear, fast round in the jump off I placed seventh overall for my class, which I was absolutely over the moon about. Doing a victory lap at my first international competition was definitely the highlight of my trip. 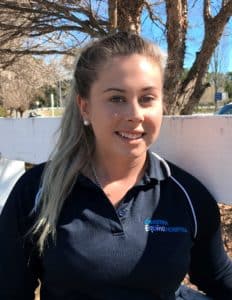 I was so fortunate to go into this trip full of the knowledge that I have gained from working at Canberra Equine Hospital. It was an eye-opener to see the differences between Australia and Ireland in regard to how the horses were kept and cared for, but I think our horses in Australia are very well-off and lucky to have the wide-open spaces and great weather. I have brought many new tips and tricks back that I can’t wait to share!