The mare appears restless; she might pace up and down, and is often not interested in food. She might flick her tail like something is bothering her and look/kick at her belly. It’s not unusual for her to get up and down several times. The mare’s behaviour can appear similar to the signs of colic. Observe your mare from a distance and call your veterinarian if you have any concerns. This stage can take up to several hours, and ends when the ‘water breaks’. 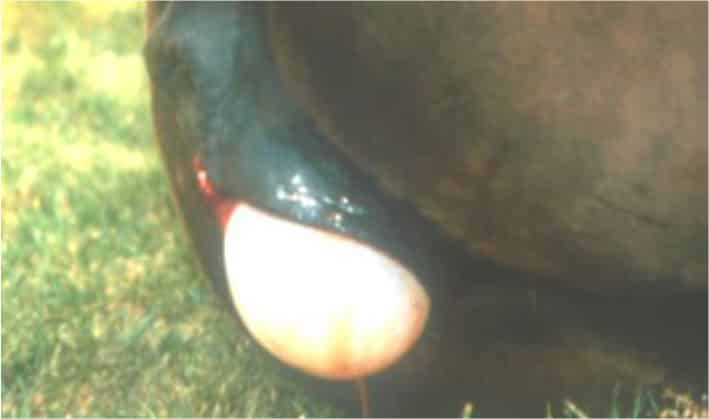 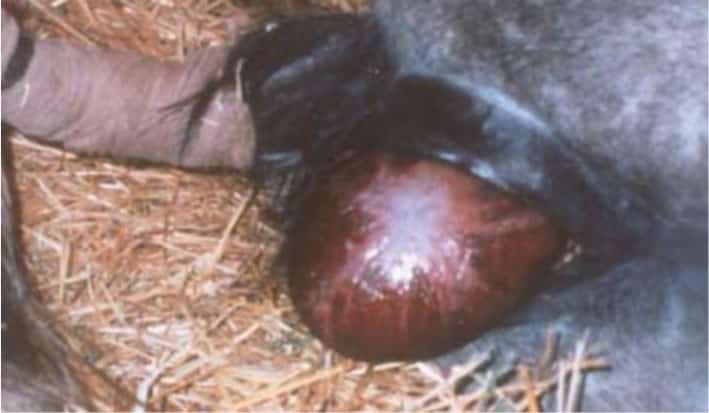 Top: The white membrane that is visible after the water has broken.
Bottom: The emergency ‘red bag’.

EMERGENCY
When you see the membrane bag you should see two feet and a nose within 15 minutes.

EMERGENCY
If the white membrane does not rupture, manually open it so the foal can breathe. 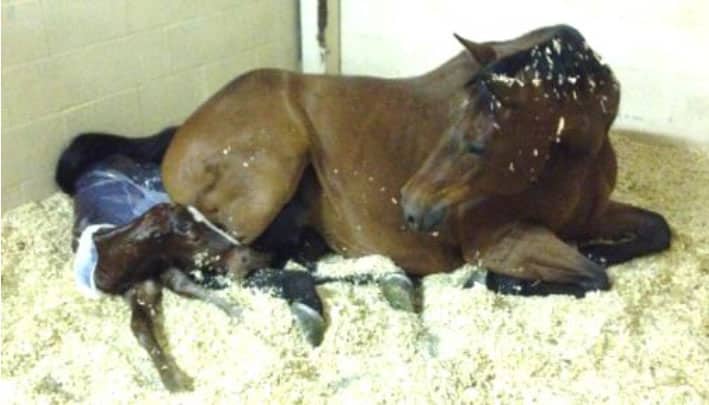 Second Stage Labour
Most mares will lie down by now. She might go up and down a few times to find the right spot. Within 20 minutes after the ‘water breaks’, a white-grey membrane becomes visible. This is the amniotic membrane which contains your foal.

EMERGENCY
Call us on 6241 8888 immediately, if the white-grey membrane does not appear within 20 minutes or the membrane bag is red as shown in the picture.

This ‘red bag’ needs to be opened manually as soon as possible. 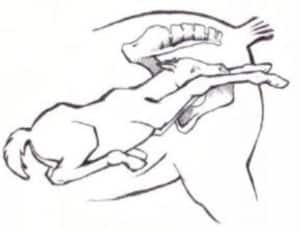 In the white membrane, a foot should be visible, followed by a second foot and shortly after, the nose on top of both feet (as shown in the picture, right). The mare is having uterine contractions and is pushing while lying down, until the foal is delivered.

This phase takes about 10 minutes. The foal ends up lying next to the mare’s hind legs (see photo bottom left), and the white membrane ruptures. The umbilical cord ruptures when the mare gets up. Do NOT cut the umbilical cord. Give the mare and the foal some privacy and observe from distance.

The placenta will hang under the mare’s tail and the mare will continue to have contractions until it passes. You can tie a knot into the placenta so it doesn’t drag on the ground. Do NOT cut any parts off. As soon as the placenta has passed, put it in a bag to the side and let your veterinarian check it the next day.

EMERGENCY
Call us on 6241 8888 if your mare doesn’t become more comfortable, or if the placenta has not passed within three hours after foaling. Retained placenta is an emergency!