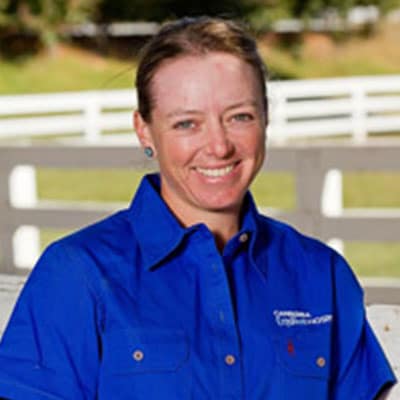 Rebecca graduated from Queensland University in 1998 with Honours. She started as an equine vet at Canberra Veterinary Hospital in 1998 and is particularly interested in equine performance and lameness problems.

Rebecca completed her Post Graduate Veterinary Membership exams for the Australian College of Veterinary Scientists (ACVSc) in the field of Equine Dentistry in 2008.

She has starred in roles on the television programme Animal Hospital and she has also been heard on ABC radio offering veterinary advice.

She is a horse rider and competitor, particularly in the field of dressage. She is currently campaigning BHM Spanish Love and BHM Spanish Amor at FEI level and is sponsored by Horseland Canberra and Prydes horse feed.

Rebecca has a Rhodesian Ridgeback dog named Charlotte and a cat named Anna Nicole that help play in the dressage arena on a daily basis whilst Rebecca trains her horses.