Rebecca graduated from Queensland University in 1998 with Honours. She started as an equine vet at Canberra Veterinary Hospital in 1998 and is particularly interested in equine performance and lameness problems.

Rebecca completed her Post Graduate Veterinary Membership exams for the Australian College of Veterinary Scientists (ACVSc) in the field of Equine Dentistry in 2008.

She has starred in roles on the television programme Animal Hospital and she has also been heard on ABC radio offering veterinary advice.

She is a horse rider and competitor, particularly in the field of dressage. She is currently campaigning BHM Spanish Love and BHM Spanish Amor at FEI level and is sponsored by Horseland Canberra and Prydes horse feed.

Rebecca has a Rhodesian Ridgeback  dog named Charlotte and a cat named Anna Nicole that help play in the dressage arena on a daily basis whilst Rebecca trains her horses.

Alexandra is originally from Austria and graduated from veterinary school in Vienna 2013. After she graduated, Alexandra completed an Internship at Weatherford Equine in Texas where she enjoyed working on cutting performance horses and their needs.

During her time in the U.S. Alexandra completed the North American Veterinary Licensing Examination and the American certification program. As a dedicated equine vet, Alexandra enjoys many aspects of equine medicine, and has a special interest in foal medicine and reproduction, as well as anesthesia and lameness.

In her free time she likes to be active outside and traveling, which brought her to Australia in 2015 to be a part of the Canberra Equine Hospital team. 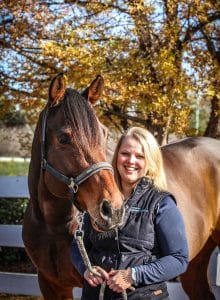 Sandra is originally from the Netherlands and ever since she was little she could be found at the local riding school. Therefore, it wasn’t a surprise when she graduated from veterinary school in Utrecht in 2015 with an equine major.

After she graduated, Sandra completed the North American Veterinary Licensing Examination prior to completing a rotating equine internship at both Cambridge Equine Hospital in the UK and the Equine Health and Performance Centre at the University of Adelaide. She also worked as an equine veterinarian at the Veterinary Clinical Centre, Charles Sturt University before she started working at Canberra Equine Hospital.

Sandra likes all aspects of equine medicine, but during her study and internships, she developed a special interest in equine internal medicine, especially foal medicine, gastrointestinal problems and cardiology.

In her spare time, Sandra enjoys travelling and being outside exploring (Australian) nature. Now that she is settled in Canberra she intends to start horse riding again. 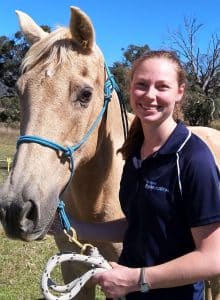 Hayley graduated with a Bachelor of Veterinary Biology and Doctor of Veterinary Medicine from the University of Sydney. Following graduation, Hayley moved to New Zealand where she worked as a vet and completed an internship in Equine Clinical Studies at Massey University.

While the grass may be greener in New Zealand, Hayley is excited to have returned to Canberra where she grew up, joining the team at Canberra Equine in February.

Hayley has a cat, Misty, who she adopted during university. In her spare time Hayley enjoys outdoor activities such as skiing, horse riding, and social team sports.